Why to Get Tested for Celiac Disease 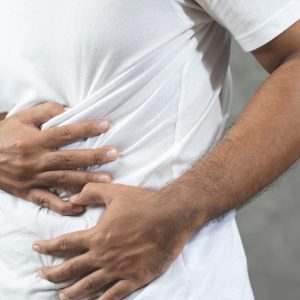 Even if your symptoms are depression, anxiety, migraines, infertility or other non-stomach issues

It may seem like a “trendy” thing to be gluten-free, but the truth is, nearly 1 in 100 people have Celiac Disease which gluten triggers, bringing on pain and discomfort – and many don’t even know that’s the cause.

Those of us who have Celiac Disease can benefit greatly from reducing or eliminating gluten from our diets – but diagnosing and treating Celiac Disease is important not only because of treating the discomfort, but Celiac Disease can also increase your risk of coronary artery disease and small bowel cancers, along with increasing your chance to have other autoimmune diseases.

That’s why it’s vital to listen to your gut (literally) and get tested if you have symptoms.

What IS Celiac Disease?

Celiac Disease is an autoimmune disease, where your body basically attacks the small intestine when it discovers a harmful intruder: Gluten.

Gluten is a protein in wheat, rye, and barley – so it’s in a lot of foods and beverages we consume. And even small amounts of gluten can trigger the response in your intestine.

It’s a bit of a family disease, too:  1 in 10 people with it have related family members who also have Celiac Disease.

In addition, Celiac Disease can develop at any age, once you’ve consumed gluten. And it make take a while for you to notice that the symptoms may be those of Celiac Disease. If left untreated, Celiac Disease can lead to a myriad of additional health problems – ones you may not think it could be a trigger of.

A strict gluten-free diet is the only treatment for Celiac Disease, and it’s life-long.

The symptoms of Celiac Disease vary greatly, and as a result can be difficult to diagnose purely by symptoms – which is why a blood test is the best way to determine if your issues can be cause by Celiac Disease.

Some common symptoms include:

In kids, common symptoms can include:

Since there are many other symptoms of Celiac Disease that you may be seemingly unrelated – such as Vitamin deficiencies, migraines, difficulty losing weight, and others – it’s a good idea to ask your doctor to be tested for Celiac Disease when discussing your ailments…especially if you have a family member that has Celiac Disease.

Get tested now for Celiac Disease

At Gastrointestinal Specialists, P.C. in Troy, Michigan, we can test you in our offices for Celiac Disease. Contact us today or schedule your appointment online.