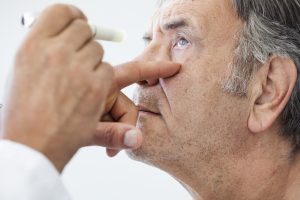 A new study from University College London suggests living in more polluted areas increases risk for glaucoma, a common cause of vision loss.

The study, led by Paul Foster, Ph.D., professor of ophthalmic epidemiology and glaucoma studies at UCL Institute of Ophthalmology and Moorfields Eye Hospital, examined data from 111,000 people across Great Britain who had their eyes examined between 2006 to 2010. The researchers found people who lived in the top 25 percent most-polluted areas were at least six percent more likely to say they had glaucoma than people in the least polluted areas.

Air quality is measured by amounts of particulate matter, the sum of all solid and liquid particles suspended in air molecules. Particulate matter can include pollen, dust, smoke, soot, and both organic and inorganic particles.

Poor air quality increases risk for lung and heart disease, stroke, Alzheimer’s disease and Parkinson’s disease. In fact, exposure to particulate matter is one of the strongest predictors of mortality due to air pollutants.

Few studies analyze the relationship between pollution and glaucoma. However, ninety percent of the Earth’s population breathes air that is above the World Health Organization’s limits for air pollution.

People who lived in more polluted areas were also more likely to have a thinner retina, a typical symptom of glaucoma progression. Pollution did not seem to affect inner eye pressure, the mechanism researchers usually associate with glaucoma progression. The team concluded air pollution must influence glaucoma development through a different route.

The researchers were not sure why particulate matter increased glaucoma incidence. Sharon Chua, Ph.D., a research fellow at the UCL Institute of Ophthalmology and Moorfields Eye Hospital suspected, “Air pollution may be contributing to glaucoma due to the constriction of blood vessels, which ties into air pollution’s links to an increased risk of heart problems. Another possibility is that particulates may have a direct toxic effect damaging the nervous system and contributing to inflammation.”

According to the Glaucoma Research Foundation, more than three million Americans have glaucoma but only half are aware they have it. Often, there are no warning signs, and patients can suffer permanent vision loss before they notice any glaucoma symptoms. For this reason, glaucoma is nicknamed “the sneak thief of sight.”

Besides air pollution, many glaucoma risk factors can increase the likelihood of developing the disease. These may include:

Take a moment to complete our Glaucoma Risk Assessment. In a matter of seconds, you can find out whether you are at elevated risk for vision loss.

At your annual comprehensive eye exam, your ophthalmologist will evaluate your vision health and test your eyes for degenerative conditions like glaucoma, cataracts and macular degeneration. Do not wait for glaucoma symptoms to appear before you make an appointment for an eye exam. Good vision requires regular maintenance, so call your doctor to schedule a full eye examination.